Refill is on a mission to inspire social change: stopping plastic bottles at its source and making it easier to refill. Over the past years, this campaign has grown into a community with over 15,000 Refill Stations, which are listed in their app. How did this develop? What’s next? Time for an interview with programme manager Gus Hoyt.

H: Which places can be added as refill stations?

G: We want to be positive, fun and inclusive. Any businesses with a publicly accessible tap, that welcomes thirsty refillers, can be added as refill station. Public fountains can also be added to the map.

H: And how does this work?

G: Our free Refill app is designed to find water on the go. Businesses have to create a free profile and are added to the map. With the specially designed window stickers local business owners show their commitment. The sticker also lowers the threshold to ask for a free water refill.

H: Refill has grown from 1 to >15,000 refill stations in only three years. How did this develop?

G: It all began in 2015, when City to Sea was founded by Nathalie Fee. In the same year, Bristol had the European Green Capital award status. Refill was selected to be one of the test pilots and ended-up being one of three ‘Legacy Initiatives’ for the city.

Like most new ideas, we started small, and tested different models as pilots. Soon it became clear that the demand for refill stations was huge, not just in Bristol, but also in other parts. We tried out different (business) models before expanding. We built it up over the next year and started to grow in other parts of the U.K. It was hard work, especially at the beginning. In 2018 it exploded.

Finding funding was tricky as the initiative was new and investors wanted to see if Refill ran the test of time before committing.

H: I saw on the app that some franchises are also added as refilling stations.

G: Yes, quite a lot actually. Costa Coffee was the first chain to join. Then Weatherspoons, Starbucks, Fullers, and some others. Also many smaller ones like Boston Tea Party, who just won the ethical café award this year for ditching single use coffee cups! The conversations take a long time but once you got them on board you’ve got a high number of refill stations.

H: Mmm, that seems to require a lot of patience, persistence and enthusiasm. What about you? How did this job fit in your career?

G: Haha, good question! Among other things I worked as scuba-diver and chef, trying to develop sustainable menus. Then my focus shifted to sustainable housing and other green projects, before getting elected as a City Councilor and serving as one of  Bristol’s first assistant mayors (for the Green party). In 2016 the party lost its local seat, but the time was right and I could increase my commitment to Refill and think about expanding over the rest of the UK.

H: Interesting! Sometimes, unexpected situations have good outcomes. How do you keep track of thousands of refill stations?

G: We try to engage very much with communities, and get involved with a local level. For the U.K. we now have five regional coordinators, who enable and empower communities to start their Refill Group. Sometimes these local groups extend to other plastic free initiatives. Facebook groups and twitter handles are also powerful tools.

H: Can you share some of your future plans?

G: Our plan is to expand it next year to Europe. The Netherlands are a high priority for us and further afield we are looking to Australia and New Zealand. In Germany this is already happening, with Refill Deutschland and we’d like to help as much as possible. We hope to enroll more European countries. Furthermore we continuously try to improve our app and documents, like the “How to Guide”.

H: Excellent! We from Refill Ambassadors will try to help out as much as we can to facilitate this process and to stimulate the #Refillution.

G: That would be great!

This conversation with Gus made my day. I will keep you up to date about the team’s  adventures over the next months. But for now, let’s switch perspectives. What about YOU? Do you live in Europe or are you travelling around here? Then I recommend you to download the Refill app (available for iOS and Android). Like Gus explained, it saves you money, helps you to stay hydrated and last but not least to reduce single-use plastics.

Refill is part of City to Sea, a Community Interest Company campaigning to prevent plastic pollution at the source. Learn more about City to Sea.

Meet the people behind refilling projects! Read the Best Practices on Frank Water and RefillMyBottle.

Can a simple and cheap water filter be the solution for people to switch to tap water? We tested the TAPP 2 Click during our research trip in Andalusia.

WHAT KIND OF WATER FILTER IS THE TAPP 2?

The TAPP 2 Click is a biodegradable water filter (Activated Carbon Block, 1-2 microns) that you connect directly to the faucet. It strongly reduces bad taste, chlorine, lead, microplastics and a wide range of other contaminants (see detailed description). By using a switch you can choose between filtered water and regular tap water.

The filter works as a kind of printer: the cartridge has to be replaced every three months (or sooner, once you’ve reached >1500 Litres). It is cheap: €89,- for the first year (device + 4 cartridges) and €60,-/year afterwards (4 cartridges).

With a green button on top one can activate a Bluetooth connection and connect the product to the ‘TAPP app’. In the app you can see how many plastic bottles you have saved, and it gives a reminder when to change the cartridge.

The TAPP 2 Click was tested in the Lemon Garden Hostel in Seville and Cádiz Inn Backpackers Hostel. A short written explanation – in English and Spanish – was added on how to use the filter.

We observed how people used the filter and asked 50 people about their opinions:

We also tried the TAPP 2 Click ourselves and really liked the taste of filtered water. Even though tap water in Cádiz and Seville is relatively good, we could clearly smell and taste the difference. We think the TAPP 2 is a great product in areas where tap water is potable yet not very tasty. When used intensively it also saves money on plastic bottles.

The product is very simple, but a little explanation is desired. Therefore we feel that the TAPP 2 Click is best used in households, small bars, cafés, AirBnB’s and smaller hotels/B&B’s. But not in places where users randomly walk in or out.

GET YOUR OWN TAPP 2

Excited? The TAPP 2 Click has been developed by TAPP Water, a young startup based in Barcelona. Get yourself a nice present and order the TAPP 2. With the coupon code ‘refillambassadors‘ you get €5,- discount on your order at TAPP (apply this code in the first step of the check-out).

Are you travelling to or living in South-East Asia? Download the new  RefillMyBottle app to locate the closest water refill point, so you don’t have to buy single-use plastic water bottles anymore. RefillMyBottle replaces the Refill Bali app, with new functionalities and more refill stations. 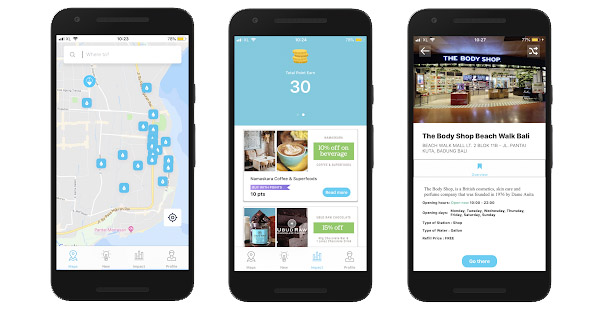 Based on your GPS location, the app locates the nearest water Refill Station and gives you directions. The app shows over 900 Refill Stations in more than 9 countries, and the database is growing fast. More than 650 new stations were added in 2018 and RefillMyBottle was officially launched in Vietnam and Laos. 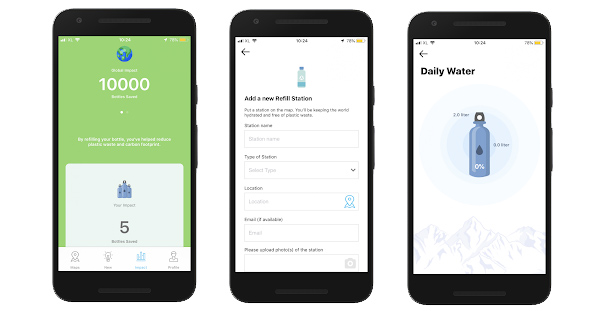 Congratulations to the RefillMyBottle team for launching the new app and growing the community!

Read our interview with Christine Go, Project Manager at RefillMyBottle. And download the free RefillMyBottle app, available for Android and iOS.